Take the Ferry to Caladesi Island: #1 Beach in America!

With 3 Miles of pristine beaches accessible only by boat, Caladesi Island is an unspoiled paradise,and a magical place for

There are two ways to get to Caladesi: Private boat or take the Caladesi Connection Ferry service that operates out of Honeym...

Young or old, the Pirate Cruise has something for everyone. Cruise away into the fantasy world of swashbucklers and pirates aboard the PIRATES RANSOM. Our journey cruises within cannon range of Captain Memo's deserted island along Florida's intercoastal waterway out into the Gulf of Mexico along Clearwater Beach....

Seriously good entertainment for the whole family! Race a Formula 1 race car, fly a jetliner or a fighter jet, or travel to space in virtual reality! Bring the little ones to the Radiator Springs - inspired race track to ride electric race cars!

SimCenterTampaBay is an indoor entertainment center for the whole family, located in Clearwater, FL. It currently houses se...

Escape Rooms are the hottest new entertainment in the country. Players, in groups of 2-8, must work together to find clues, crack codes and solve puzzles to escape the room before time runs out.
Can you escape in 60 minutes?

How many people can play?
The game requires a minimum of 2 players. Groups of 2-8 players can play at one time. The more brain power the be...

SeaWorld takes you on a one-of-a-kind journey to the wonders that exist beyond the ocean?s door. A place where up-close encounters connect you to the energy, excitement, and mystery of the sea and sea life. A world of fascinating days, captivating nights, and exhilarating adventure. Once you?ve been here, you?ll never look at the sea and its incredible inhabitants the...

You?re the star at Universal Studios, the number one movie and TV based theme park in the world. At this real film and television studio you?ll go behind the scenes, beyond the screen and right into the action of your favorite movies. ...

Not your typical aquarium! Clearwater Marine Aquarium (CMA) is a working hospital dedicated to the rescue, rehab and release of marine animals. CMA is home to Winter the dolphin, star of the popular Dolphin Tale movies filmed on location! See our mission in action on a behind-the-scenes tour of our rehab and surgical areas, get up-close with animal encounters, feed s...

Shop for the best clothing and souvenirs for the beach at Surfstyle.com! Catch and ride a wave! Experience the rush of a crashing wave at our Indoor Surf Machine inside our Surf-Style's Megastore on Clearwater Beachwalk in full view of your family and friends. A rush that you normally experience in the ocean is what you will experience indoors! Plus, there's plenty of...

Tarpon Springs is a community of year-round festivals and fun....

Tampa Bay Downs is the only Thoroughbred race track on the West Coast of Florida, and is known as one of America's oldest and most well-maintained racetracks. Tampa Bay Downs first opened its doors in 1926 under the name of Tampa Downs, and has since had a long and colorful history. The present owner purchased the track in 1986, and since then the Tampa Bay Downs...

Indoor Family Entertainment for all ages! Experience the thrill of high flyin' fun on our Gigantic Trampoline Arena, AirSports like Dodgeball, Basketball, and Volleyball, and Arcade games and prizes. Centrally located and close to Clearwater & St Pete Beaches....

Along the pristine shores of Clearwater Beach two hours before the sun sinks into the Gulf of Mexico people flock to Pier 60 Park to salute the setting of the Florida sun. Come out and celebrate as local artisans and crafters offer handmade treasures and street performers delight and amaze with spectacular feats of skill while you sink your feet into the sand and danc...

Includes a unique children's art museum in addition to works of many Florida and local artists.

A world-class educational facility featuring nearly 5,000 aquatic plants and animals which tell the tale of water, native land and marine animals in Florida.

Working cattle ranch which returns visitors to the simpler life of the "Cracker Cowboy."Designated an important bird area by Florida Audubon Society.

One of the top three zoos of its size in North America featuring more than 1,500 animals representing 350 exotic species including the manatee.

A showcase of the plant and animal species native to the area. Preserve featuring rescued and rehabilitated birds, reptilian, insect and fish displays, plant and energy exhibits, and nature trails through a diversity of natural Florida habitats, allowing viewing of native birds, insects, amphibians, mammals and reptiles.

Largest science center in the Southeastern United States and home of Florida's only IMAX DOME theater.

A "street" festival located on the promenade portion of Clearwater Beach's famous fishing pier, celebrating the setting of the sun and featuring artists, craftsmen and performers with weekend musical entertainment.

Only children's art museum on the West Coast of Florida and one of three in Florida with award-winning exhibitions featuring Floridian art.

The original station for the Orange Belt Railroad System dating to 1889, houses history of Dunedin and Pinellas County.

Third largest of its kind in U.S. featuring art, photography and documentary exhibits from around the world.

A Smithsonian Institute Affiliate with a permanent collection of early 1960s popular culture with a focus on the Cuban Missile Crisis and a Kennedy collection. New wing houses Smithsonian artifacts. Special exhibition slated from February to May will feature 250 superlative pieces from the State Russian Museum in St. Petersburg with artifacts spanning over 800 years of Russian history.

Stretch mental muscles, test wits, fire up the imagination with exhibits in the arts, sciences, technology and health, all designed to be touched, moved, explored at the 'Children's Hands On' museum popular with all ages.

A 21-acre, turn-of-the-century Pinellas County village. Attractions include restored houses of local pioneers, the Lowe Barn, an old railroad depot, and some 10 other historical structures. The Pinellas Historical Museum traces the county's history from the Spanish-Indian period to contemporary times.

Features a permanent collection of over 150 commemorative brass facsimiles.

With a rotating gallery, features the history of commercial aviation in Florida with a replica of the Benoit and a timeline exhibit depicting the development of St. Petersburg and Pinellas County.

Features artifacts of our regional area from prehistoric times to Aboriginal Indians and pioneers, with four educational exhibits a year.

A hands-on teaching museum with interactive exhibits exploring physics, archaeology and inventions, the Carol Samuels Observatory and a 16th century Floridian Indian Village featuring the mounds and temples of both a Chief and a Shaman, a Village Cook's hut, an Indian garden and a realistic archaeological excavation of an Indian midden.

Contains history and ecology exhibits and information, particularly how the marine and natural environments shaped the city's development, the local people and the sponging industry.

Features exhibits detailing the founding of Ybor City and the development of the cigar trade.

One of only three historical landmark districts in the state, a cultural and historical community offering shopping, art galleries, fine and casual dining, micro-brewery, a restored cigar factory, museums and walking tours.

Totally restored to its original 1920s glory, this community theater features all types of entertainment.

Ruth Eckerd Hall is recognized as one of the best acoustic facilities in the state of Florida. The building is a Frank Lloyd Wright Foundation design and features international, world-class artists from Broadway to classical music, pop stars to comedy, and modern and classical dance.

In its 69th season, this community theater offers musicals, comedies, dramas and mysteries at affordable prices from September through June. The Playhouse offers summer acting programs for children and adults.

Musicals and dramas are presented with earlier than customary show times throughout the year.

Intimate setting for contemporary and classic productions. November through June. Produces Shakespeare in the Park.

A multi-entertainment facility hosting concerts, broadway shows, the performing arts, circuses, and ice shows in both the arena and recently renovated theater.

Enter FREE TRIP FOR 2 contestfor a chance to win a fantastic vacation to beautiful Clearwater Beach. 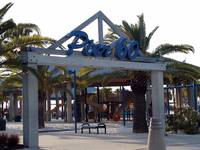 My husband and I have been coming to Clearwater Beach for almost 28 years. What a beautiful place...

Hello I am from Pittsburch and have been coming to clearwater beach for about six years. I love eve...

What can I say? I love soaking up the sun and eating grouper snadwiches at Frenchy's. Life is a (cle...

We have been to Clearwater every year for 4 years and it is like heaven on earth! Paradise! We lov...

"Our family has been vacationing at Clearwater Beach for the past 8 years. We love the beach, the fa...